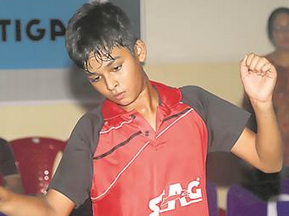 Sachit of DAV Public School and Vibhuti of Carmel Convent School claimed the titles in the boys senior singles category and girls senior singles category in the Inter-School Table Tennis Championships organised by Chandigarh Table Tennis Association under the aegis of Table Tennis Federation of India at Tender Heart School, Sector 33 earlier this week. In the boys senior singles final, Sachit ended the challenge of Ryan Gandhi of KB DAV School, Sector 7 with a narrow 3-2 (11-8, 11-8, 9-11, 7-11,11-7) win to win the title. Sachit made a confident start in the match by winning the opening game 11-8. The youngster won the second game with the same margin before Gandhi made a comeback in the match. Gandhi won the third game in the match 11-9 before winning the fourth game 11-7 to equalise in the match. The final game saw Sachit playing with control and the DAV Public School player won the final game 11-7 to claim the title.